Well, here it is. Thursday. Thanksgiving. One day before another 28th. Wouldn’t it have been ironic if … well, anyway.

Oh yes, I have much to be grateful for. I have a house to live in. I have food to eat. When I turn on the tap, fresh clean water runs out in unlimited quantities. I have a box on the wall on which, when I get cold, I flip a switch and heat comes out to warm our home. I have some work that I do that is meaningful to me. I have a wife who loves me, friends and family who care for us. I have a car that runs, and money to buy gas for it. I have clothes to wear. I have my health, mostly, and the wherewithal to get medical care when I need it. I can see. I can hear. I can speak. I can walk. I have all my arms and legs, both eyes and ears. There are millions of people on this planet that can’t make these statements, so for myself, I am thankful that I can. So is it ungrateful that eleven months later, I still want, no, crave … no, there isn’t a word strong enough for what I feel; maybe yearn for, pine for, weep for (some days), the one thing I cannot have? Am I the spoiled child who wanted a new Playstation 3, but only gets a 20-year-old Game Boy? Or a lump of coal, or a bag of ashes? I just don’t have the energy left to throw a tantrum.

Last year, due to the vagaries of the Jewish calendar, Thanksgiving and Hanukkah

coincided, Thanksgivukkah. Jake came home for the holidays. We cooked together the last time on Thursday night, making platters full of latkes and fixin’s for the turkey. On Sunday, my mom had her traditional Hanukkah party, and Jake did kitchen duty as always, frying up the delectable potato pancakes with his usual concentration and care. It was a wonderful weekend. We laughed together, had so very much to be thankful for. Jake was doing better, had a new job prospect, settling into his new place, his new life, was just doing … better. A month later he would be dead, but how were we to know that?

This is the first year in a very, very long time we aren’t having a dinner gathering with friends and family. I cannot remember the last time we didn’t. Twenty-five years at least. What I hadn’t realized is, that decision, to forgo our usual gut-busting repast, has repercussions that resonate beyond our own lives. We have some dear friends with whom we have spent Thanksgiving together for many years. They have two adult daughters, one just a couple of years older than Jake, with whom he became friends. As the Thanksgivings passed by, one after the other, we watched our children grow up a little more each year. This year, when we told everyone we wouldn’t be hosting dinner, we pretty much left it at that. When Terry asked our friends what they were doing, they said since their Thanksgiving tradition was to come to our house for dinner, they weren’t sure. They decided to go out for Chinese food. This is when we realized, once again, that our actions affect others in so many unknown ways. Originally T and I thought we would just cook something and stay home, but I re-thought that and it wouldn’t be a good thing to do. So since, as I said above, this feels like someone else’s holiday, we are going to do what any good Jewish family does on someone else’s holiday: we’ll join our friends for Chinese food. Perhaps we are starting a new tradition.

We won’t be going to my mom’s party this year either. It is still too difficult to sit at a table 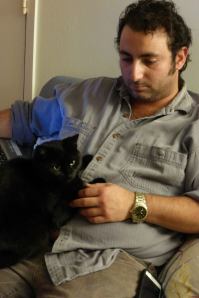 with happy, joyous people and look at the “empty chair” in which my son should be sitting. Or at the permanent dent in the couch where he used to sit in the throes of the food coma that follows. In spite of all that we have to be grateful for this year, there is still that huge hollow place in our hearts and lives where Jake used to live. Now it is inhabited by his ‘spirit’. But dammit, I want him. His solid, physical presence, that is what I miss so much today. His wicked sense of humor, his sly wisecracks, his depth of caring, his love for his friends and family. We’ll just have to carry that on in his stead. Perhaps next year we’ll roast a turkey, bake up some stuffing, whip up a vat of gravy and toast his memory with clear eyes and lighter hearts. This year, that is all but impossible.

The Infinite Fountain of Love and Loss flows unceasingly into the pool of memory and sorrow. I created this blog in response to the most dreadful tragedy every parent fears, the death of a child, our 24 year old son, Jake. We are now on an unimagined journey along this road of grief and recovery. If you can find some comfort within these pages, than I will have succeeded in some small measure.
View all posts by edcol52 →
This entry was posted in Ceremony, Food, Friends and Family, Jake Colman, Memory and tagged deathofason, family, friends, gratitude, grievingparents, hanukkah, latkes, Sorrow, thankful, thanksgiving. Bookmark the permalink.