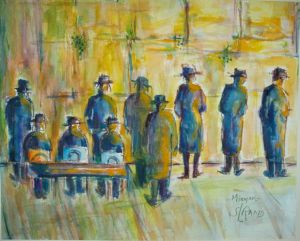 religious observances. The sources of this requirement are several Biblical verses regarding congregations and the number of people who constitute a ‘congregation’, as interpreted by a variety of scholars throughout the ages. It is traditionally accepted that public prayer is preferable to private because it enables one to perform several obligations not available in individual worship. Among other things, you need an assembly of ten men to read from the Torah, recite certain prayers, and to say the Mourner’s Kaddish.

Since Jake’s passing I have been getting up at 6:30 every morning (no small feat in and of itself) to go to shul (synagogue) to say Kaddish for him.  Our shul is a small, neighborhood affair, housed in a converted storefront; it is an unpretentious, welcoming community. Our rabbi follows the Orthodox Chassidic traditions of Chabad, but it is not formally affiliated with Chabad. Nor any other movement. We are basically on our own; we survive through the donations of the members. We don’t charge an annual membership fee; no one is ever turned away because of financial, religious, or any other reasons. All are welcome. We have been ‘members’ for around 13 years. Now, I was not raised in a religious family, nor have I been particularly observant throughout my life. Well, hardly observant at all. How we came to belong to this little shul, and the transformations it (and we) have undergone to arrive at this present juncture is a long story, but the short answer is: on account of Jake. Naturally.

Because ours is a small community, and morning services are at 6:30 AM, there are some days where we don’t get ten men, don’t have a minyan. Often there will only be nine, and we sit and wait for the tenth man to show up. Sometimes he does, sometimes he doesn’t. That means whoever is saying Kaddish cannot. Those saying Kaddish for a loved one need me, and I need them. We all need each other. Every man is important.

This morning when I arrived, I was the tenth man; I made the minyan. A mitzvah of its own. But a two-sided one. Yes, I filled the quorum, made it possible for those who needed to say Kaddish, but I was late. I came at the end of the service so there were some prayers in the earlier part that couldn’t be said. In reality, the real mitzvah is to be the first one there. So no one has to wait; you have the minyan right away, all the necessary obligations can be fulfilled, the prayer service properly completed, and people can go about their day. But the upshot is that ten of us ultimately showed up. In Judaism, there is a curious precept that one who has the intent to perform a mitzvah gets credit for it even if he cannot do so because of circumstances beyond his control. If I show up to say Kaddish for Jake, and we don’t have a minyan, I can’t actually say it, but he gets the credit anyway. However, it is far better to be there and do the deed, to support others who need to elevate the souls of their loved departed, than to just think about it. The intent isn’t always enough. You have to act to accomplish something. 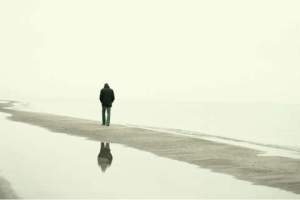 In grief, we are  often isolated, we feel so terribly alone, wondering how the world around us can continue as if nothing happened, when our personal world is in shambles, shattered, forever changed. When we come together, share our heartache, let each other know we are here too, that we all feel the same anguish, the same bewilderment, the same crushing sorrow, we create our own minyan. Where we can know that the person standing next to us is on the same path. Has the same doubts and fears. Cries the same tears. Has the same questions. This can be comforting in a strange way. Knowing that you aren’t the only crazy one, that others are going through the same crucible, can be reassuring somehow. Nothing will ever take away the heartache, but we may be able to help each other along the road. We all need someone to lean on, sometimes. We are truly in this together. Like the morning minyan, every person is important.

The Infinite Fountain of Love and Loss flows unceasingly into the pool of memory and sorrow. I created this blog in response to the most dreadful tragedy every parent fears, the death of a child, our 24 year old son, Jake. We are now on an unimagined journey along this road of grief and recovery. If you can find some comfort within these pages, than I will have succeeded in some small measure.
View all posts by edcol52 →
This entry was posted in Ceremony, Coping, Grief, Honoring Jake, Jake Colman, Sadness, Support and tagged grieveingparent, lossofachild, minyan, mournerskaddish. Bookmark the permalink.

6 Responses to Making the Minyan