We recently went north to attend a wedding in Sebastopol, near Santa Rosa in Northern California. On our way back home, we drove out to the Sonoma coast along the Russian River valley, a lovely 20 miles through rolling forested mountains. We arrived on the coast just south of Jenner around 3 PM. I wanted to photograph some of the breath-taking scenery, and T, who was driving, turned onto a small side road that led toward the ocean. After a couple of hundred yards, the road ended in a wide gravel area where we parked. A trail meandered a short distance out to the bluffs, about 100 feet above the whitecapped-sea.

We walked through the rippling waves of dried grass, the wind howling off the ocean. I made some photos, bracing myself against the 30 mph winds. T started walking back to the car as I continued photographing the flowers and golden fields that linked the rolling coastal hills to the sea. I noticed her up ahead, walking back and forth through a field, looking down, stooping occasionally, as if she were picking flowers, but no flowers grew in the dry scruffy grass.

I walked over to see what she was doing and discovered a most extraordinary thing, the Memory Labyrinth.

She had been directed there by a couple she had seen wandering in the field, and the man had insisted, insisted, she go and look at it. He was right. Out there, nearly invisible unless you were right upon it, was a circle about 75 feet across with a sinuous path worn into the grass. From the entrance, the path led you in circles toward the center, back out to the edge, and finally into the very center. In the grass growing between the curves of the path, people had left a staggering collection of artifacts. Intensely personal things. Photographs, painted stones, jewelry, mirrors, shells, feathers, pebbles, sticks, beads, figurines, bottles, every kind of thing imaginable, all nestled down among the weeds. Many of them were clearly memorials, many were messages of hope, strength, peace, and love. 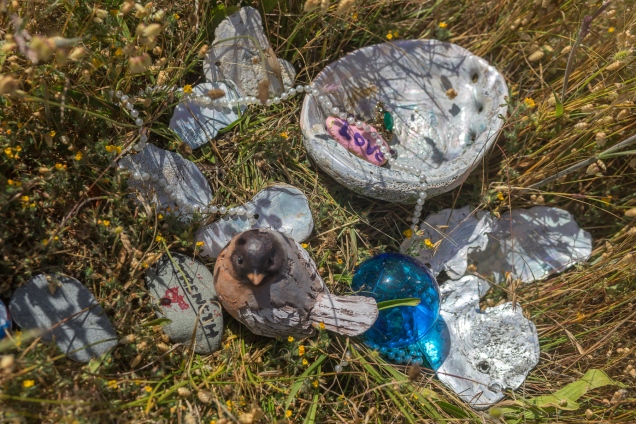 Here, the wind seemed a bit diminished but still powerful. What we noticed was that even though the grasses were rippling in the wind, it moved none of the objects. There was a carved and painted wooden coyote figure perched precariously on a rock, undisturbed. (The coyote is Jake’s spirit animal. When T was in the hospital giving birth, we had a little stone coyote figure that stood watch on her night table. I wore a silver coyote pin during her pregnancy and for years afterward.) Feathers did not move even though the stalks of grass right next to them did. It was if we had entered an energy vortex of some kind. A portal to another place. Time seemed to stop. We walked the path examining each tableau as if it held some special meaning, and each did. Perhaps not for us, but certainly for the person who created it. Many were cryptic, many spoke directly to us. One painted rock, with a six-pointed flower, said “Three Years Mom”. It has been nearly three years since Jake died.

One said, “The bodies (sic) ability to heal is greater than you know”. One said, “Call Your Mother”. It was overwhelming. We made our way to the center, where an altar of sorts had formed with the accumulation of offerings. And it was clear this thing had been there for years. Someone had created it, and hundreds of people had found their way there and left fragments of their spirit. 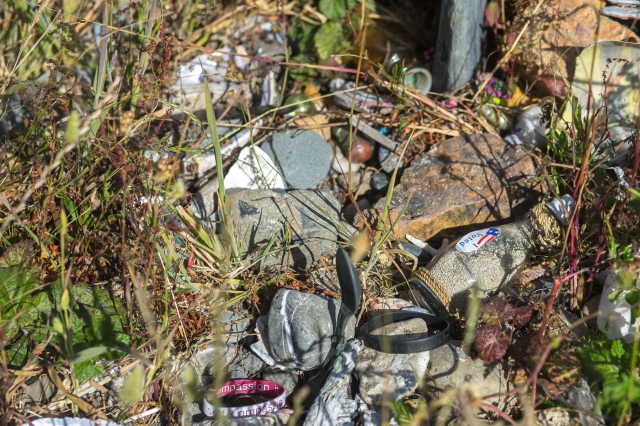 I stood there, wind whipping my clothes, desperately trying to think of something I could leave. I felt impelled, compelled, commanded to do so, but I didn’t have anything. Jake’s presence hovered over us as I frantically patted my pockets looking for something I could contribute. There weren’t any stones on the ground we could use. Nothing. T joined me at the center and said simply, “Leave your bracelet”. Several months ago, another grieving dad sent me a black neoprene bracelet embossed with “Grieving Dad – Love is Forever”. He got it from the Grieving Dads website, one of the blogs I follow. I peeled it off and laid it on a rock at the center of the altar. (between the spoon and the bottle filled with sand in the picture above).  So now a little piece of me, a piece of Jake, rests among the bits of other people’s lives along the wind-swept Sonoma coast. Who knows if some future visitor may see the black band, stoop to read it, and find an unlooked-for connection.

T went back to the car to get another lens I needed and brought some stones and a stick to make a little cairn at the entrance.

We stood there, tears streaming down our faces, drying in the cold ocean wind. I glanced at my watch. More than an hour had slipped away while we were within the worn path of the labyrinth. It was as if we had been in another dimension, had traveled to another world. We returned to the car and headed south to visit friends who lost their son in a tragic accident, some years ago. As we drove down the coast, through Bodega Bay, and along Tomales Bay, Van Morrison came on the radio singing, Warm Love. The words “…and it’s ever present, everywhere/and it’s ever present everywhere/that warm love” repeated over and over as we wound our way along the inlet that separates Point Reyes from the mainland. Ever Present. Everywhere. That’s Jake.

It is impossible to describe the experience with words and pictures. They are a pale approximation of the power of what lay out in this unmarked field along the coast. If you didn’t know it was there, you would never find it unless some other traveler directed you. Once found, you will never forget it, nor how to get back.

The Infinite Fountain of Love and Loss flows unceasingly into the pool of memory and sorrow. I created this blog in response to the most dreadful tragedy every parent fears, the death of a child, our 24 year old son, Jake. We are now on an unimagined journey along this road of grief and recovery. If you can find some comfort within these pages, than I will have succeeded in some small measure.
View all posts by edcol52 →
This entry was posted in Honoring Jake, Jake Colman, Memory and tagged bereavedparent, coping, grievingparent, lossofachild, memorial, memory, vastloss. Bookmark the permalink.

1 Response to The Memory Labyrinth